This tank was taken down in preparation for a move June 2019. The new house does not have the room necessary for this tank.

I have since sold all of the reef gear to a gentleman on Facebook. He was very excited at acquiring the equipment.

This was an amazing experience for me, and I enjoyed my time with this tank. I’m not sure if I’ll ever do another reef tank. For now, I have a small planted tank that is allowing me to continue my aquarium hobby. 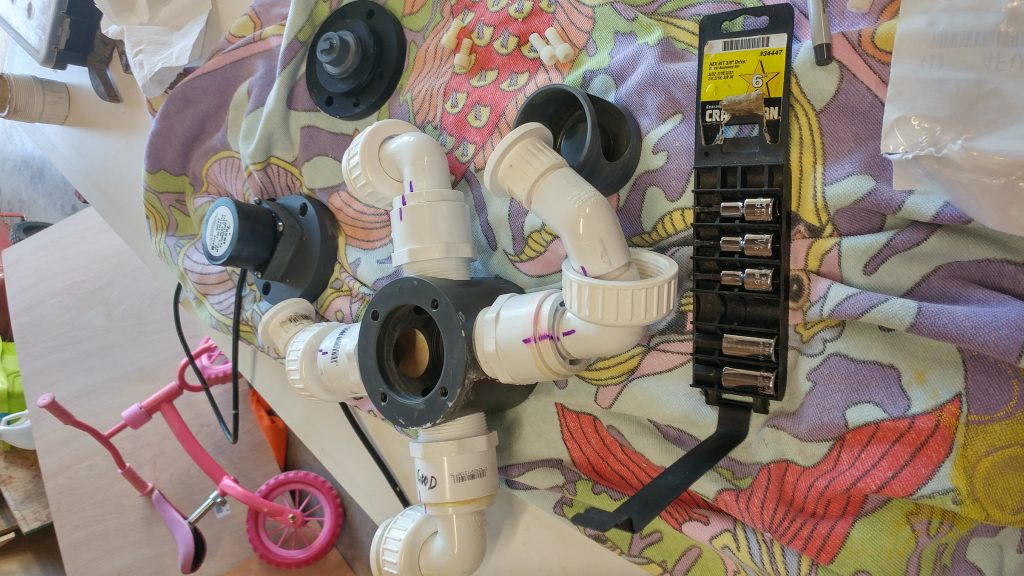 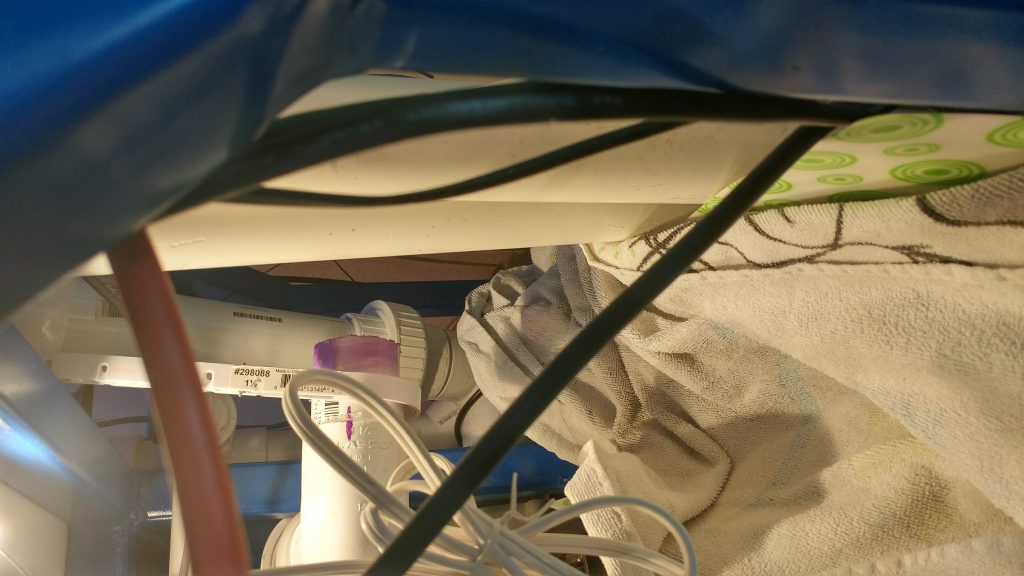 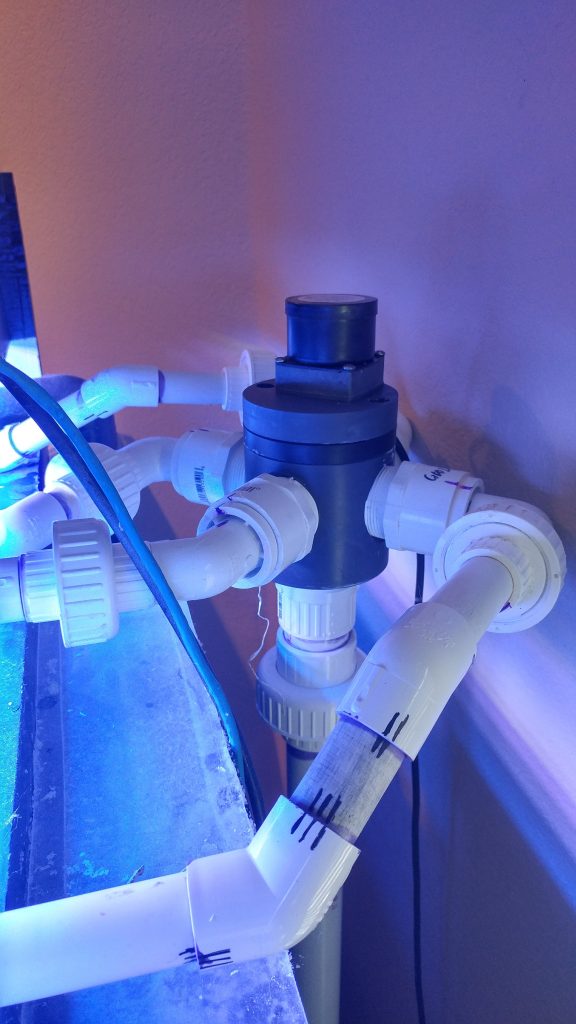 Had the first outage due to the Automated Aquarium this last week.

The relay for the heaters stopped working. I got an email that the temperature in the tank had dipped below 75 degrees. I got home from work to a tank that was at 74 degrees. I did some quick troubleshooting. Then I ran an extension chord from a close-by wall outlet and plugged the heaters straight into the wall.

I ordered a new relay board and on Sunday spent 15 minutes swapping the bad board with the new one.

Now I have a ‘bad’ 8 channel board that I can take my time replacing just the relay on it.

Honestly, the 74 degrees wasn’t too bad.

I took some pics, but there’s nothing to really look at. It’s jus a sainsmart relay board sitting in an electrical box.

No livestock was lost due to the chillier temps.

About this time last year it froze outside and my water storage burst pipes. I told myself that I’d add a second pump to the fresh water storage so that I could recirculate the water in the tanks when it froze. I never got around to making this change, so I ended up doing it on Saturday in 40º temperatures.

The pump was added very hastily and it shows in the quality of the work and the amount of purple primer you see on the pipes. 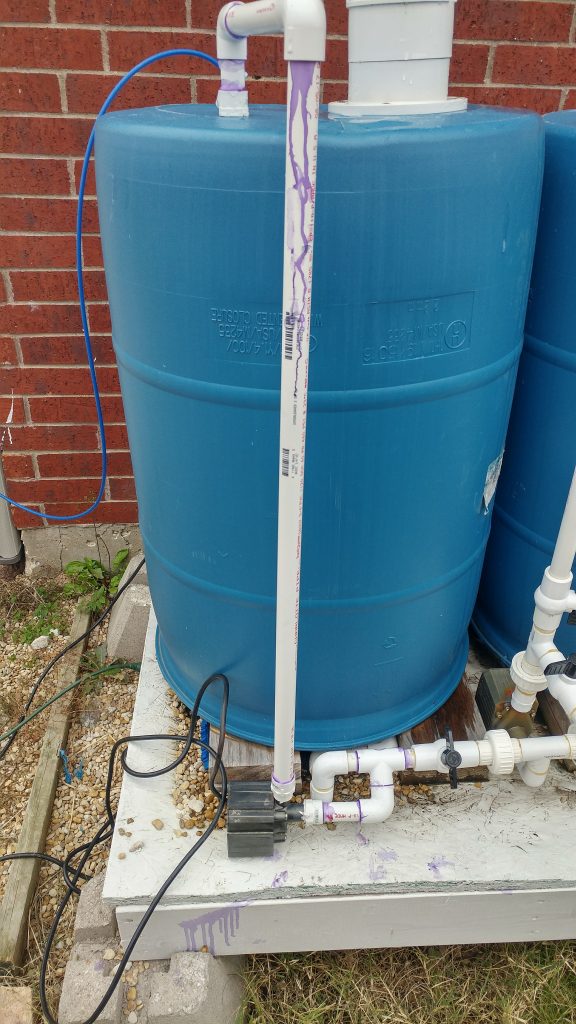 Livestock-wise, everything is going well. I did have a mushroom split, so now there’s three. 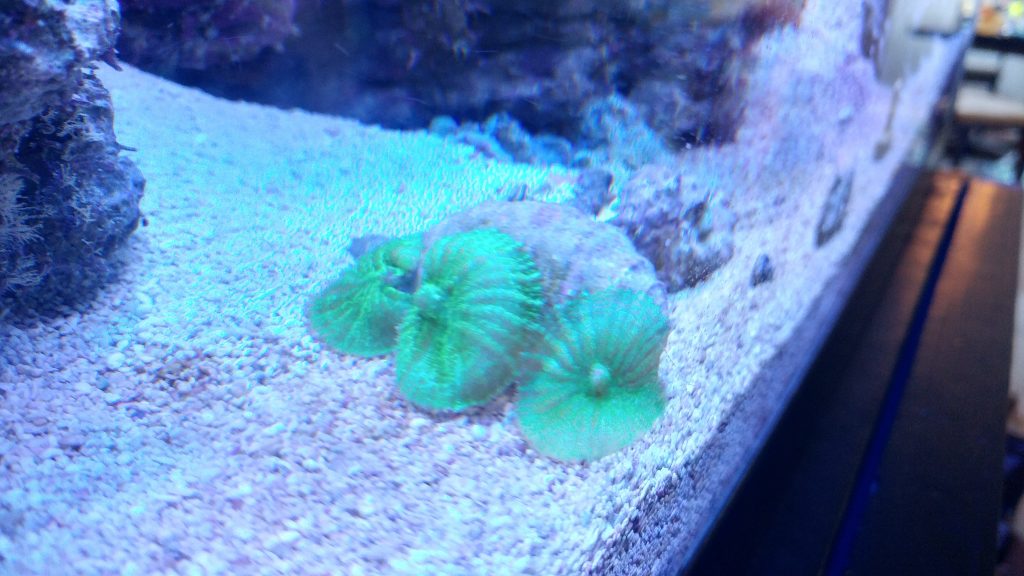 I also got some more YouTube videos created of the starfish flipping over and another feeding:

First the new Additions. Not sure what these three are yet, but I got them for a really good price. 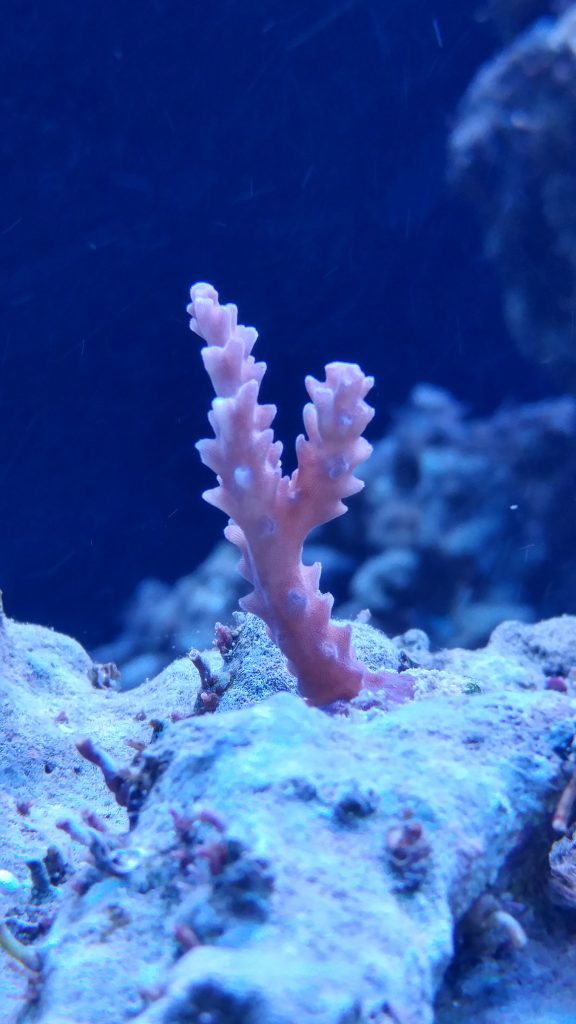 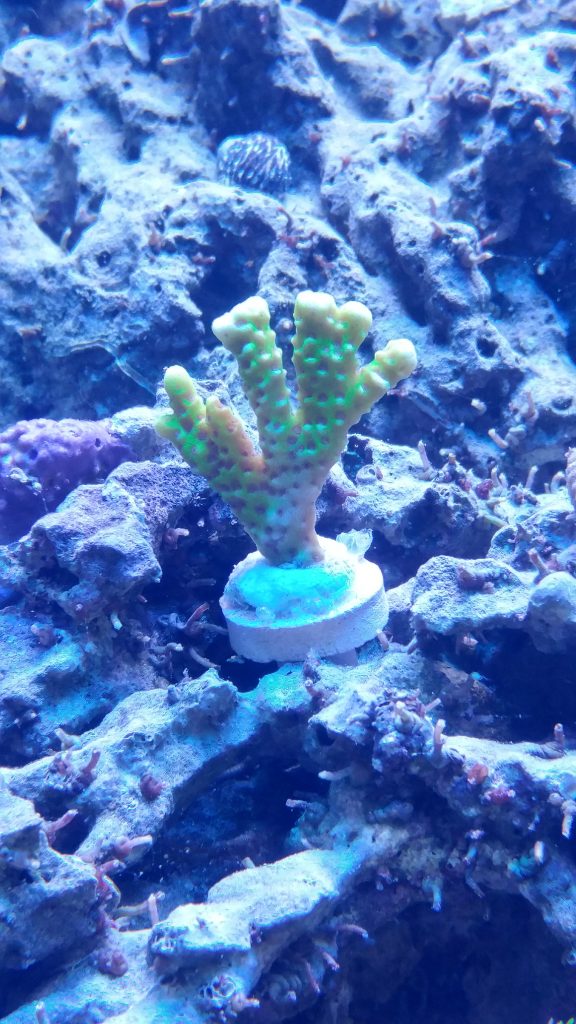 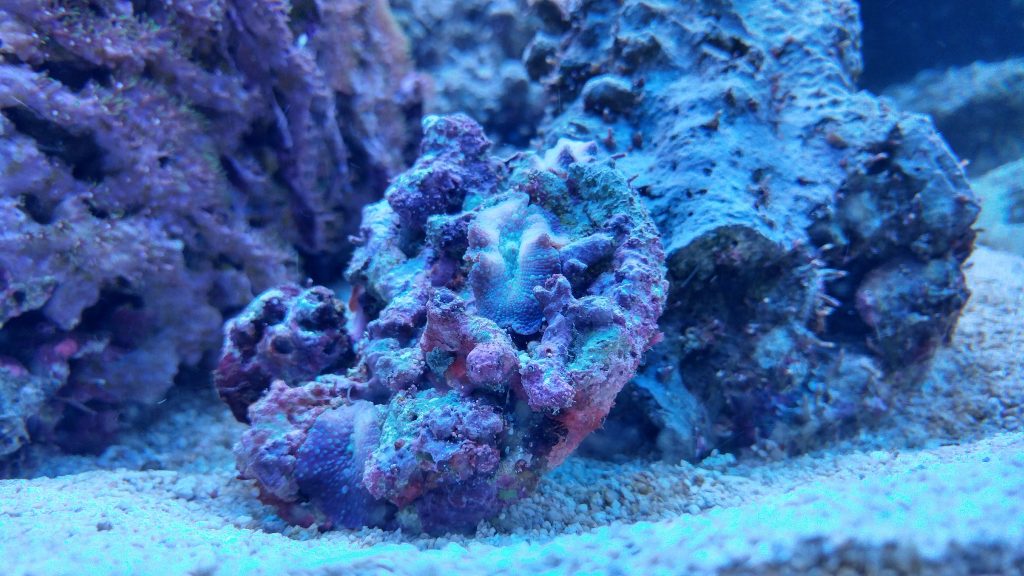 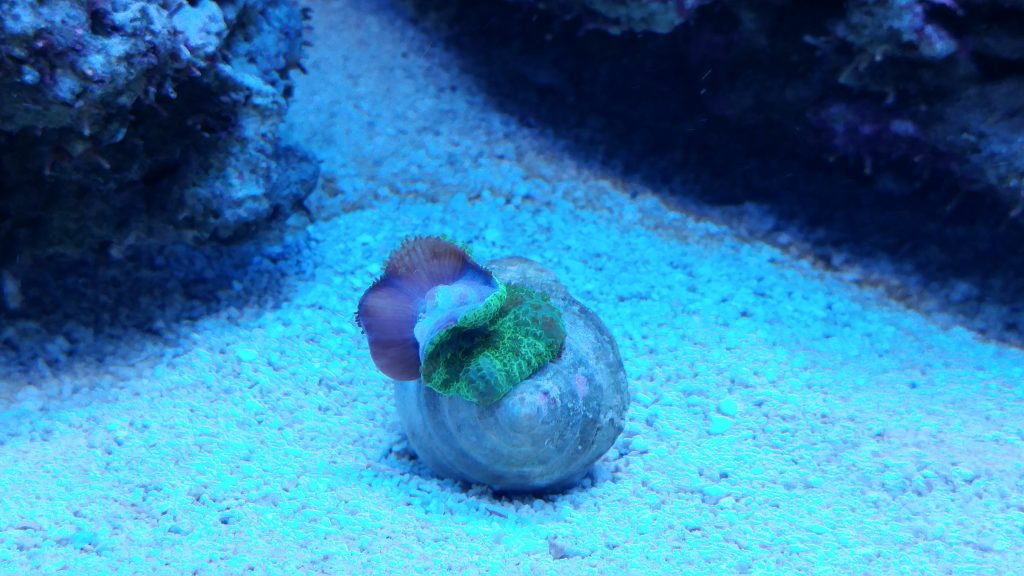 And updates on old. The Green Birdsnest is looking a little thin. It looks like some of it may be bleaching out. I made the mistake of touching it when I had to re-seat it in the epoxy. 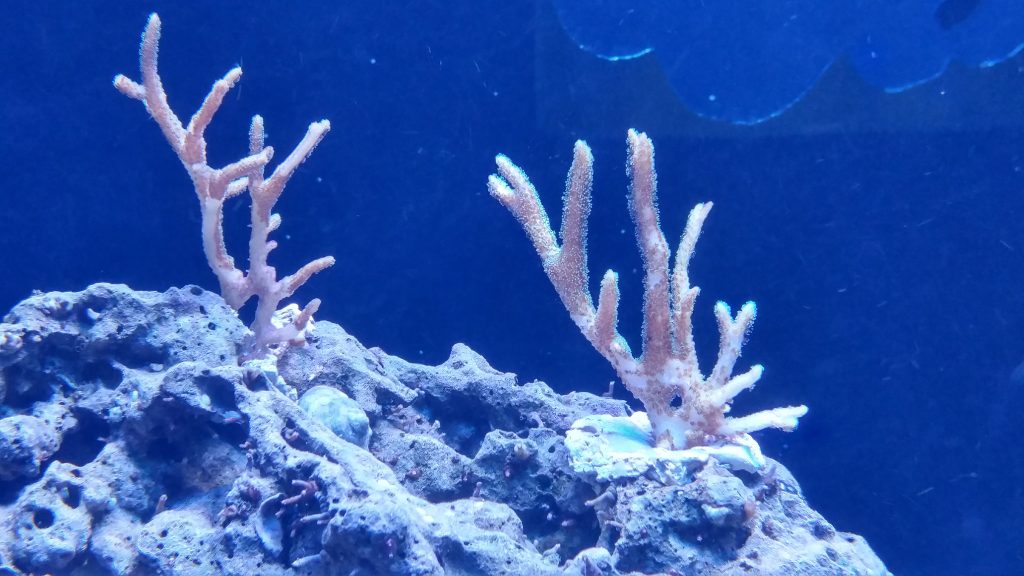 The Blastimossa is looking much happier in it’s new spot. It looks like I had it too close to the lights in the old spot. I also moved the Favia thinking it might like a spot with better water flow. 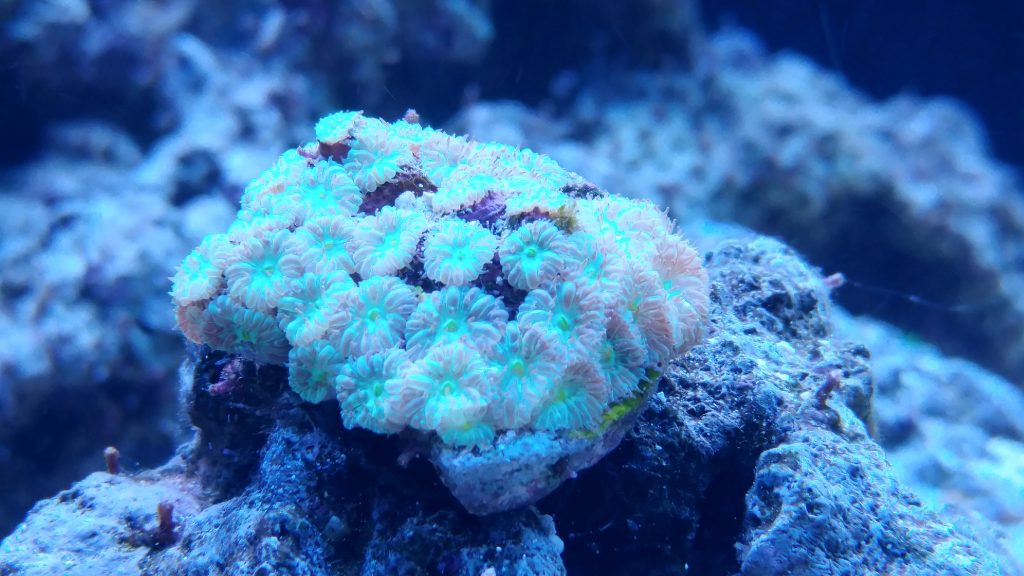 These Zoas have really started coming out and started spreading in the tank some. They were hitch-hikers and I never expected them to make it. 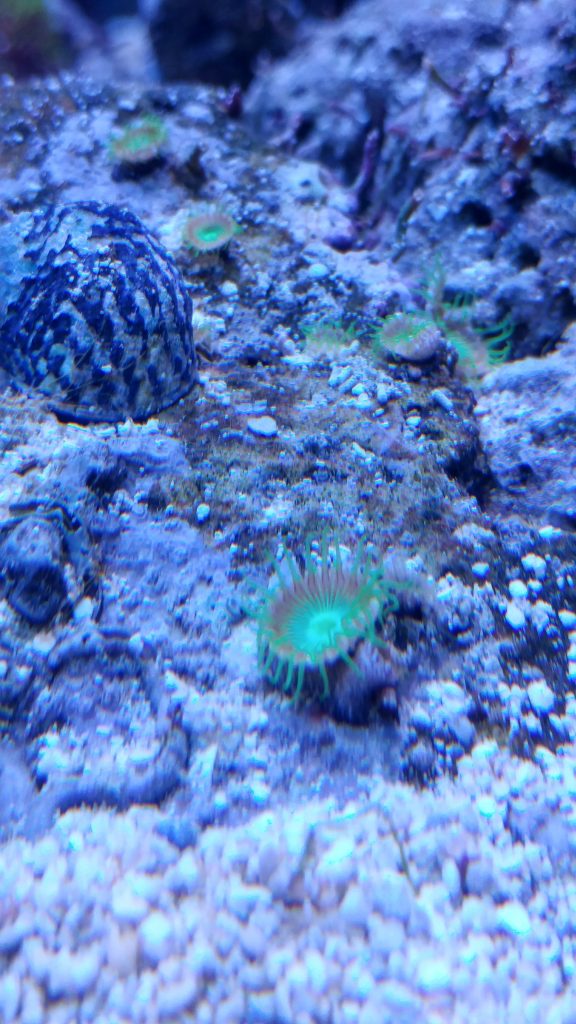 Lastly, I’ve started seeing a lot of these white dots all over the tank. I think it’s just coraline algae starting to spread, but not sure. 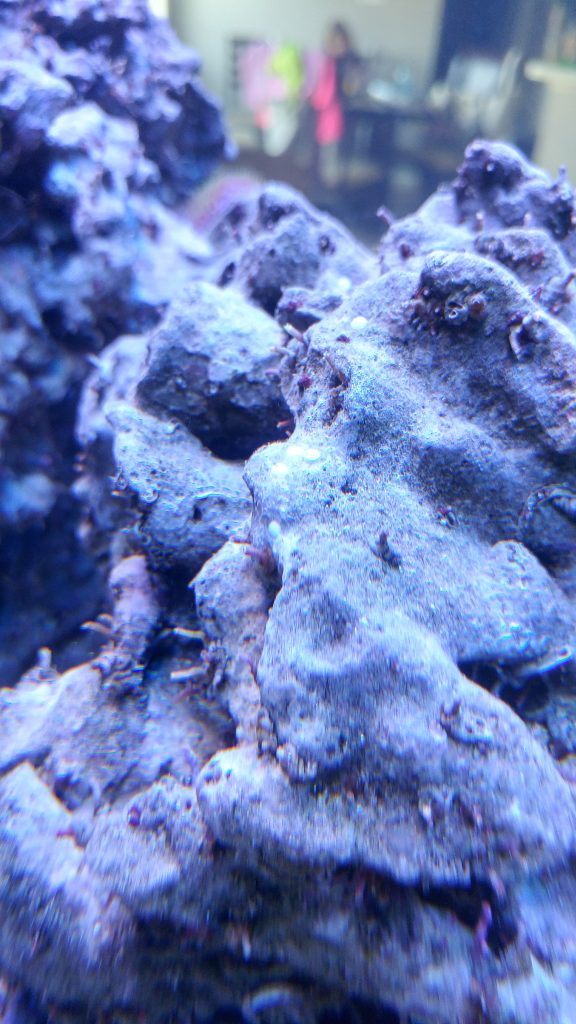 Wow. It might still be too early to tell, but initial results show that adding the fans to the tank seem to help quite a bit.

The tank went from regular flux to holding steady.

I’ll probably add some logic to the circuitry to turn the fans on/off based on tank temperature. I don’t want the fans lowering the temperature too much at night. Maybe I’ll have them come on at 80 degrees and go off if the tank drops below 79. Then, if the fans can’t keep up, the chiller will kick on at 81.

The tank has been doing quite well. The chiller cools the tank, but it doesn’t do it as quickly as it should.

This morning I added two fans to see if evaporative cooling may help the situation. I’ll give it a week or so and then I’ll compare graphs to see if the chiller is cycling on/off less.

It’s my typical, use what you have approach to adding the fans. Ever since I started adding Kalk to the tank, I’ve been getting quite large pH swings.

To help combat the swings, I decided to put my refugium light on a reverse-daylight cycle. Currently it was running 24×7.

Looking at my pH graph for the last 6 months, you can see the point that I started adding the Kalk (the first jump up in pH for the top-off water). Prior to this point, both pH probes were in the tank and usually shadowed each other +/- .1 pH.

Around 5/1 I put too much Kalk in the top-off and it raised the pH in the main tank.

Where you’ll see the difference in the tank swing is in the last week or two since setting up the reverse daylight. The pH only swings a few points. The large dip is right after a water change. I’m not sure I let the salt-water mix long enough to have it properly oxygenated.

It’s strange to be talking about Linux stuff on a reef site, but then again…

I spent the better part of the weekend setting up an ELK stack on my web server. I’ve never been happy with the silly graphs my reeflog was producing. Mostly the fact that they were not dynamic at all, which made it very painful if I wanted to see something that was already graphed.

I already have all the data going to a MySQL, and I’ve been searching for a better way of graphing that data.

Thus enters Grafana. Grafana is an application that runs on the web server and can be used to alert, show and graph various timedate based data. Unfortunately it does not have hooks for getting data directly from a MySQL database.

So, you install ElasticSearch. ElasticSearch is basically a nodb logging database that can take in data from endpoints and store it in an easily searchable fashion… But how do I get the data from  the MySQL DB into the ElasticSearch.

Next you install logstash. Logstash is yet another service that runs. You can configure various inputs and provide it various outputs and it will transpose the data from one source to the other. In my case, it logs in to the MySQL DB, grabs any data since the last update, and puts it into ElasticSearch.

Probably the biggest thing I’ve learned since doing this is that the Wifi connection to the internet is spotty at best for my poor little Raspberry Pi. There’s quite a few times where it doesn’t get data up to the server. It doesn’t really matter… most things don’t happen quite that quickly in a reef tank. The one thing I probably miss out on is anytime the top-off pump runs as it typically only runs for a minute to begin with.

If I setup a kalk reactor like I want to, then I may switch out the pump with a doser. That would run slower than a top-off pump would and may get caught be the graph more often.

Here’s a screenshot of the current dashboard. Alerts are at the top. pH and Temperature are graphed at the bottom. 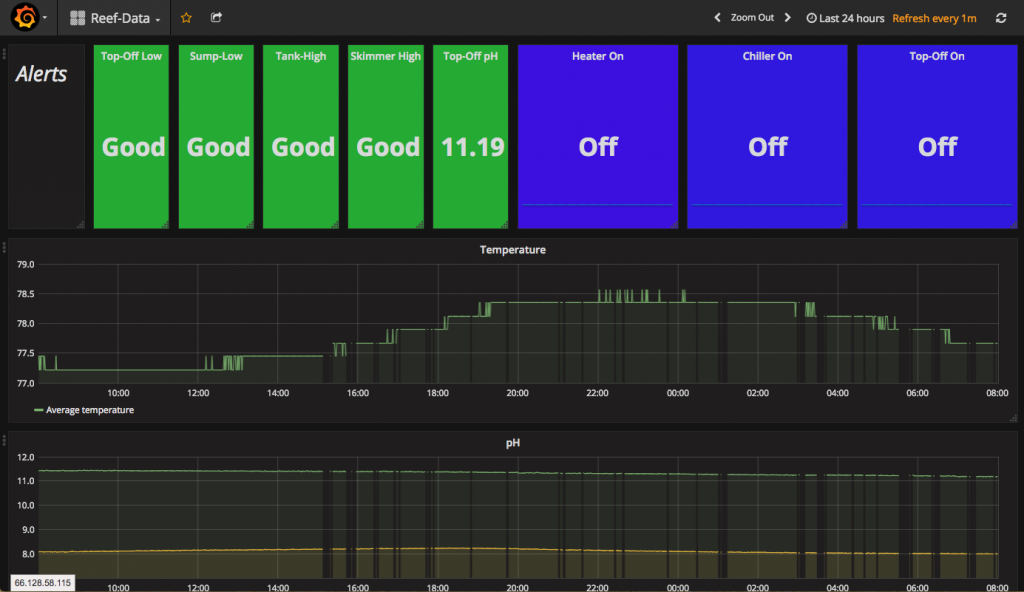